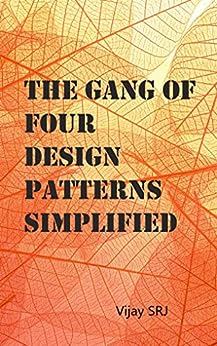 The Gang of Four Design Patterns are often hard to get .

This book provides an easier explanation of all the 23 design patterns with use cases implemented in Java and with link to GitHub.

Deals with how to create objects.

Singleton – Create a single instance of an object.

Prototype– Use an existing object by cloning it.

Factory Method – Delegate creation of an object to another object.

Abstract Factory – Delegate creation of a group of related objects to another object.

Builder – Delegate creation of a complex object to another object.

Deals with how to structure objects.

Facade – Provide a single interface for a group of related operations.

Deals with how to communicate between objects.

Mediator – Act as a broker for communication between objects.

Template – Provide basic template of an algorithm to implement.

Observer – Intimate group of objects when a change occurs.

Iterator – Provide a generic way to iterate through collection of objects.

Visitor – Add new responsibilities to an object without changing its existing behavior.

Note : The original book by the Gang of Four was referred for these posts.